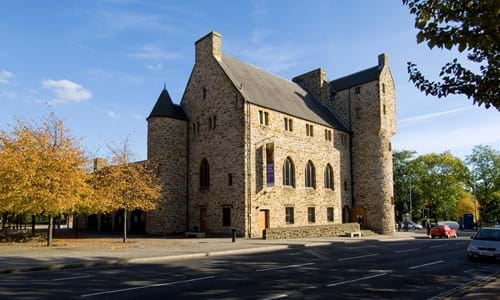 On 17th February Glasgow City Council announced its budget for the forthcoming year and plans for post-covid recovery. Included in that budget is the statement “ As well as confirming the funding to keep all local libraries open, it will also allocate more than £1 million to reopen community centres and public halls, and £650k to reopen the much-loved St Mungo’s Museum and Provand’s Lordship”  This feels like a victory for all those who campaigned tirelessly for the council to keep local libraries, museums and community centres open. Was this part of the budget the result of that campaigning, did Glasgow City Council listen to the voices of its citizens and realise how committed people were to their cultural and community centres, recognising the value they have in the ethos and development of a city. 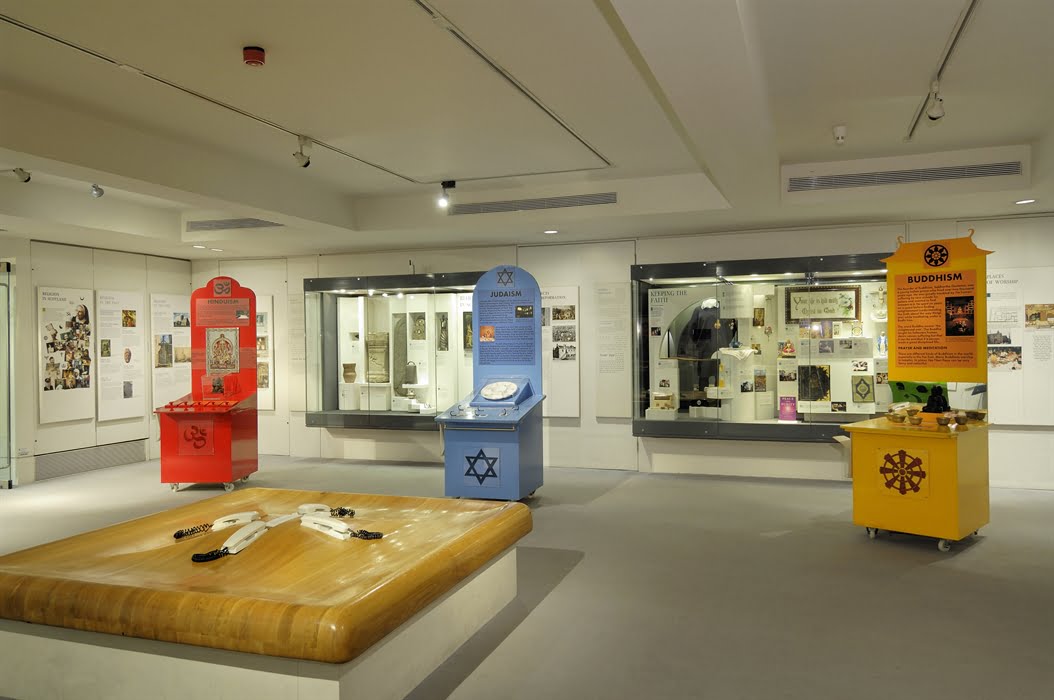 I was involved in the campaign to save St Mungo’s Museum or Religious Life and Art so that it would keep its interfaith and multifaith focus. Glasgow Life had indicated that its plan was to enter into an agreement with Historic Environment Scotland who own Glasgow Cathedral to revamp the Cathedral precinct to attract more visitors to the historic centre of Glasgow. This revamp would include St Mungo’s Museum and could mean a change in its focus to link more clearly with the history of the Cathedral. This has not yet been resolved but it is surely in keeping with the Christian origins of Glasgow to show its growth as the multifaith city, committed to social and interfaith harmony, that it has become.

The idea of a Museum of Religious Life and Art was the brainchild of Mark O’Neill, at that time Senior Curator of History with Gl. Museums. From the outset it was developed with a socially driven purpose, expressed in the mission statement:

to explore the importance of religion in people’s everyday lives across the world and across time, aiming to promote mutual understanding and respect between people of different faiths and none.

Mark and his team were convinced that if the museum was to live up to this vision stakeholders would have to be consulted and included in the museum’s development – even in the decision to call it The St Mungo Museum of Religious Life and Art. The stakeholders were the various faith communities in Glasgow as well as the Glasgow Sharing of Faiths, the first and, at that time, only interfaith group in Scotland.  All these groups were approached and involved – donating artefacts and giving suggestions about the layout.  Once opened the museum became a centre for interfaith celebrations and dialogues and because of the involvement of faith communities from its inception the Museum felt very much like a home from home. It did indeed become a much loved venue and the thought of it closing was like a bereavement and loss of what was considered a safe and neutral space to conduct what were sometimes difficult dialogues. 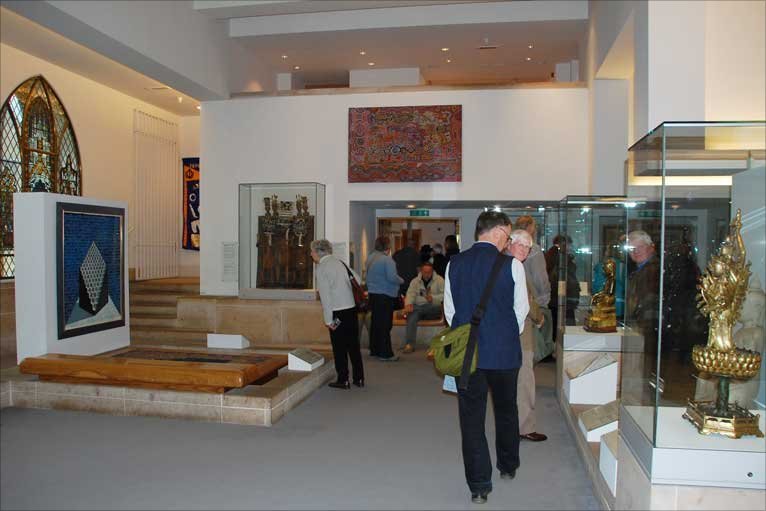 The Museum opened on 4th April 1993, one of only two Museums of Religion in Europe. Now there are more and many of those setting up similar museums came to Glasgow to learn from the St. Mungo experience. For these interfaith friends the thought of St Mungo’s closing or even changing its focus seemed incredible and many of them added their voices of protest to those of Glaswegians and the thousands of people who signed the petition instigated by Interfaith Glasgow.

This is not the first time that there have been plans to close St Mungo’s Museum, nor the first time it has been saved. It’s as though Glasgow Council needs to be reminded from time to time of its significance and the important contribution it makes to good community relations. Hopefully that no matter what future developments there might be stakeholders from Glasgow’s diverse religious communities, interfaith organisations, and anti-sectarian organisations will be consulted. 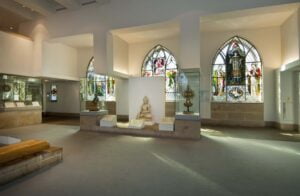 The St Mungo Museum of Religious Life and Art is a very special place. It’s named after Glasgow’s patron saint who brought the Christian faith to Scotland in the 6th century and designed in the style of the medieval Bishops’ Castle on which site it’s built.  When it was opened in 1993 it was one of only two museums of religions in Europe though there were Christian monasteries and churches that had been converted into or housed displays of religion. What made St Mungo’s different was that it included all religions and none and in the 1990s this wasn’t very popular especially with the Christian Churches, many of whom had a theology of believing they had an exclusive insight into truth and salvation and weren’t at all sure about displaying artefacts from ‘non-christian’ faiths.  What challenged many of them was that the Gallery of Religious Life showed that all faiths celebrated, ritualised, and customised significant moments in life – birth, initiation, commitment, marriage, death. The displays honoured the integrity of each faith but showed their similarities.  I delighted to see statues of the Virgin Mary with her son Jesus next to the Goddess Isis with her son Horus in exactly the same pose, or the infant Jesus next to the infant Krishna. This did annoy some people, but part of interfaith work is to realise that all want to celebrate significant rites of passage and that there are universal symbols and commonalities in the way they do this.  It should also be said of course that it attracted a lot of praise and recognition for being ground-breaking and innovative and for significant artefacts like the statue of Siva Nataraja and the first authentic zen garden in Britain.

When the museum was being set up the curators worked hard to involve stakeholders and be inclusive of all faiths. Through the Glasgow Sharing of Faiths, faith communities were kept informed of developments, were consulted about the displays, and even contributed to them.  Because of this the various faith communities felt they had an investment in the museum. In a very special way, it felt like home to them, and was used to celebrate festivals and events like the exhibition on the Declaration Towards a Global Ethic which was brought to Glasgow by Hans Kung who had presented it and had it accepted at the Parliament of World Religions in 1993, the same year the museum opened. But above all the museum became a centre for interfaith activity. 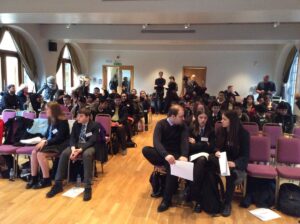 The mission statement of St Mungo’s says that it is designed to ‘explore the importance of religion in people’s everyday lives across the world and across time, aiming to promote mutual understanding and respect between people of different faiths and none’. As an interfaith practitioner I’ve had a lot to do with the museum and been greatly supported in my work by the curator, manager and staff.  For about fifteen years we hosted an annual Meet Your Neighbour event which happened over a weekend but took an interfaith committee many months to plan. Different religious communities set up a display of their faith in the function room and were available to meet and talk to visitors. The weekend was punctuated by musical or cultural events, like the Jewish Choral Society, Hindu dancers, bellringers, tabla and sitar players. We had workshops on storytelling, sari wearing. Mehndi, calligraphy.  We involved schools and on occasions when we decided on a concert on the Sunday afternoon, we had people standing by the zen garden with the doors and windows open so that they could hear the concert as there were no seats left in the function room. Sometimes the dialogues were of a more serious nature and in the run up to the reconvening of the Scottish Parliament in 1999 it was where members of faith communities gathered to consider what the New Scotland would be like for people of faith. 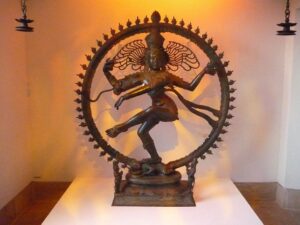 It was in the light of these discussions that the Scottish Interfaith Consultative Group was formed and this then led to the setting up of the Scottish Interfaith Council which today is known as Interfaith Scotland.  The Council was started with very little – myself as the founding director, the gift of a computer from my community and the use of an office in St Mungo’s. This consolidated the relationship between the Museum and SIFC and we continued to work well together. For us St Mungo’s became the home to our dialogues with First Ministers, religious leaders, interfaith practitioners from England, Ireland, and Wales. It’s where we grew and developed. We eventually had to move out when we got funding to appoint staff and even then we were given an office by Glasgow Life, the body that runs Glasgow Museums. And continued to work together especially in projects such as the setting up of the Forum of Faiths by Glasgow City Council.

I think it’s obvious that St Mungo’s Museum is very close to my heart and I hope it’s obvious that it has fulfilled its mission well and contributed positively to the social fabric of Glasgow.  So, I am appalled and dismayed that there is some likelihood that it might not open after the pandemic.  The suggestion that the Council is looking to transfer the museum to a third party is worrying. St Mungo’s is unique, it has made a significant contribution to overcome racism, sectarianism and religious prejudice. It has worked with faith communities, school children and others to promote mutual understanding, respect and cooperation. It has involved stakeholders in a way no other museum has and to shut it would be a disgrace as far as I am concerned. It’s something that must be contested.