Building A Home Together - A Colloquium on Faith in Public Life

This year the Committee for Interreligious Dialogue held its annual colloquium in partnership with the Justice and Peace Commission and the Parliamentary Office. The focus was on Faith in Public Life and the participants included representatives from other denominations as well as an imam from the Shia and Sunni tradition of Islam and the Chair of the Baha’i Council of Scotland. Patricia Ferguson chaired the event and kept the conversation flowing.

The inspiration behind the programme was the last paragraph in Lord Jonathan Sack’s book ‘The Home We Build Together’:

“What then is society? It is where we set aside all considerations of wealth and power and value people for what they are and what they give. It is where Jew and Christian, Muslim and Hindu, Buddhist and Sikh, can come together, bound by their commonalities, enlarged by their differences. It is where we join in civil conversations about the kind of society we wish to create for the sake of our grandchildren not yet born. It is where we share an overarching identity, a first language of citizenship, despite our different second languages of ethnicity or faith. It is where strangers can become friends. It is not a vehicle of salvation, but it is the most effective form yet devised for respectful coexistence. Society is the home we build together when we bring our several gifts to the common good.”

Lord John Mcfall introduced the colloquium on the Friday evening and set the scene by reflecting on his own experience of what it meant to be a person of faith in politics.

For John there were commonalities between the Church and politics.  Both

Quoting  Heraclitus, “No man ever steps in the same river twice, for it's not the same river and he's not the same man”,  Lord Mcfall suggested that change is the only reality. In a society  where there is less interest in religion and faith, there is a yearning for answers to the big questions of life and it might be that the only architecture to hold society together is religion.  Some people have a sense that society is against religion but this is not so for religion has now become integrated into society and we can decide where society is going.  There is always a propensity for disagreement and conflict but Pope Francis can be an example for us- not to engage in conflict with his detractors because this distracts from the agenda of trying to do the best for society, especially at a time of cultural wars and identity politics.

Lord Mcfall talked about those who had inspired him

Two important issues of concern for the Pope are overcoming poverty and caring for the environment. What is now needed are strategies to face these issues.

Lord Mcfall encouraged us to affirm secular society, not just be its critics and suggested that today it could be that young people are ahead of us in the issues of today.

In the second session Anthony Horan, the Churches Parliamentary Officer, considered  how in a testing political time, society appears to be becoming increasingly polarised and fragmented. He posed the questions, how can we unite society? Is there a common goal we all share? How can we, as people of faith, contribute to a more peaceful and just world?

There is much polarisation and fragmentation in the country. The Brexit referendum divided the country and the Independence referendum showed up pockets of disagreement which are still bubbling away under the surface. A lot of the arguments are taking place on social media where people say vitriolic things about people that they would never say to their face. Is this where political difference is leading us?

The riots that took place across England in 2011 were described by Lord Sacks as the bursting of a political dam that had been building up for years.  We are living in an age of moral decay, individualistic culture and the politics of identity.  In such a situation Anthony asked if we were putting ourselves into pigeon holes and setting groups against one another.  Is it possible for us to find a common goal.  Two things to unite would be to focus on human dignity which is to respect the intrinsic value of every human being without exception, from the beginning of life to its end and concern for the common good.  We should seek the good of others and society as we would for our own good.  Four values from Catholic Social Teaching could be an inspiration: truth, love, justice and freedom.

Anthony introduced us to the life of Blessed Hildegaard Burjan who struggled for the rights of workers at the beginning of the last century. She was seen as the conscience of the Parliament and government – could this be a role for religion today? As Pope Francis has said ‘ we will either build the future together or there will be no future’.

Allan: Central to Baha’is is service to humanity. An important teaching is that humanity is one family – a unity with various different identities but the most important identity is to be part of the human race

Imam Rabbani spoke of how his grandparents were British citizens and how his grandfather  had fought for Britain in the Second World War, yet were looked on with suspicion when they came to Scotland.  Because of this younger generations are more Scotland focussed than older generations. For many it is easier to call themselves Scottish than British.  Freedom of religious expression is important and better here than in some Muslim countries

Duncan: politicians see citizens as economic units and it is important to recover a new concept of citizenship from a faith perspective. To be a citizen is to be given rights but these can be taken away by governments as in Myanmar. People of faith should be involved in society and become active in organisations such as community councils.

Sheikh Pakdin reflected on the difference between religious and civic identity. Society is an entity with its own identity which is a combination of individual identities. These can make society stronger. Individuals come together because of the needs of society and work together to meet these needs. For people of faith  belief in God can be a source of unity but not mean anything to the secular.

Reflecting together on how to build a sense of our common civic identity across different communities the following points emerged:

Session 4:   ‘Human Fraternity for Peace and Living Together’

The document was signed in the name of God and suffering humanity, the poor, destitute, marginalised, victims of war, persecution and torture….  It

The Pope and the Grand Imam declare their commitment to make the principles in the document known at every level at society, asking that it becomes the object of research in all schools, universities and institutes of formation thus educating new generations to bring goodness and peace to others and to be defenders everywhere of the rights of the oppressed and of the least of our brothers and sisters.

In this final session we watched a video of the First Minister’s TED talk on wellbeing as a marker of a good society.  We agreed it was important to take forward the issues raised in the colloquium, perhaps focussing on common issues, using the experience of activists or organising a shared experience of an issue.

A vote of thanks was given for all those who have participated and made the event so successful.

O God from whom on different paths all of us have come,

To whom on different paths all of us are going,

Make strong in our hearts that which unites us,

Build bridges across all that divides us.

United make us rejoice in our diversity,

at one in our witness to that peace, which you, O God alone can give.  Amen 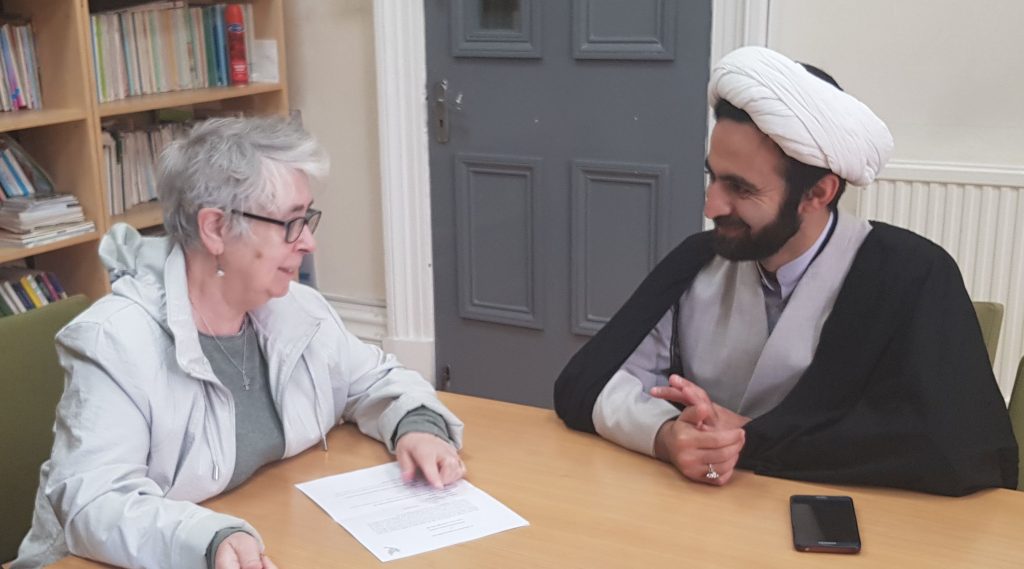 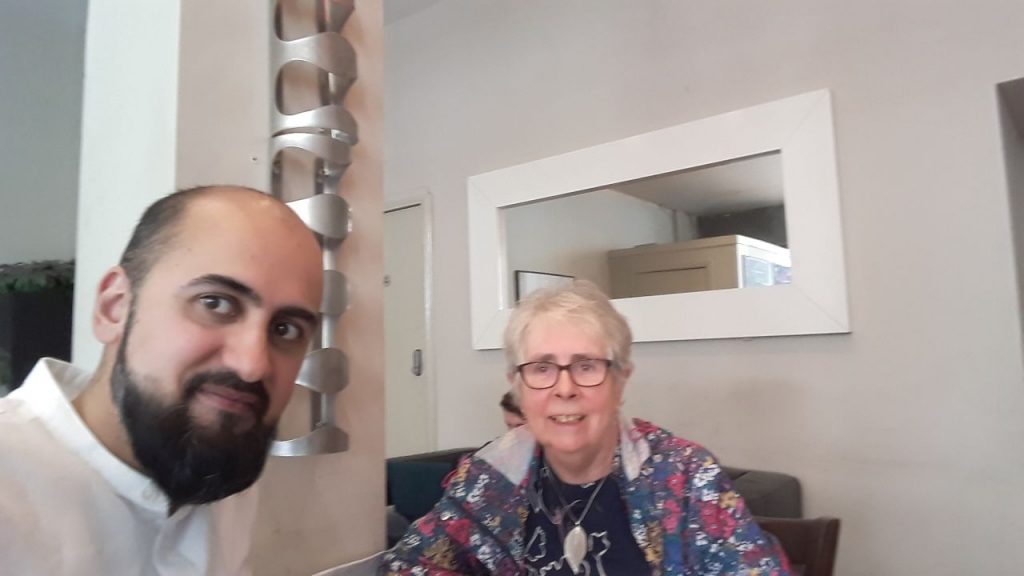 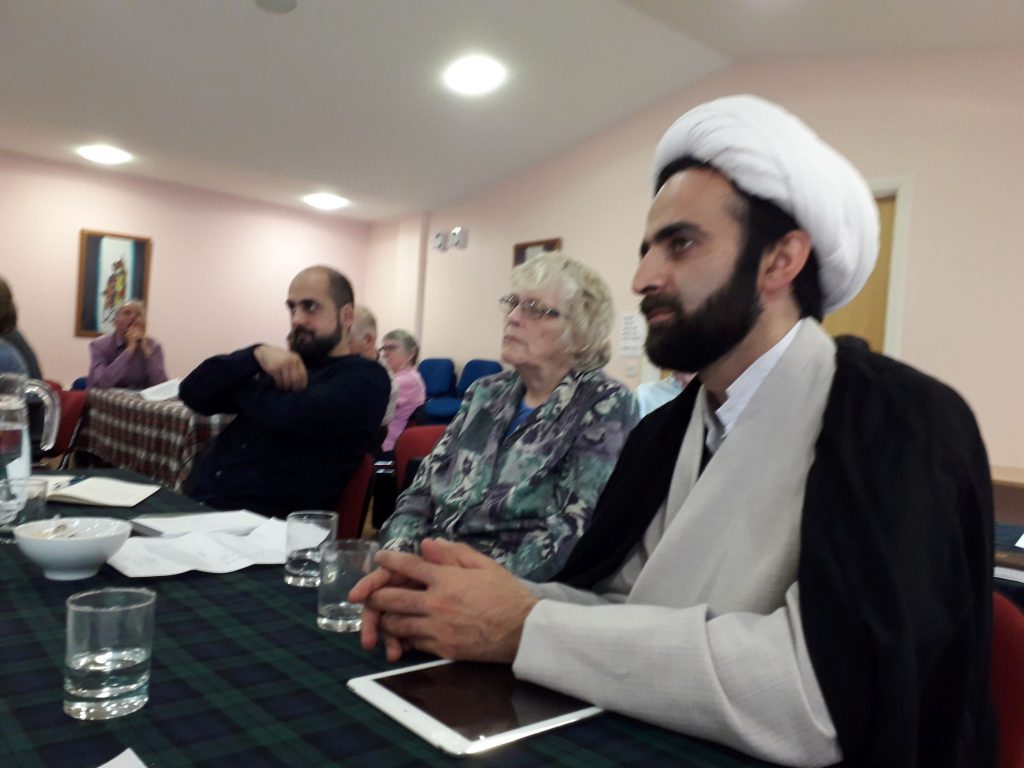 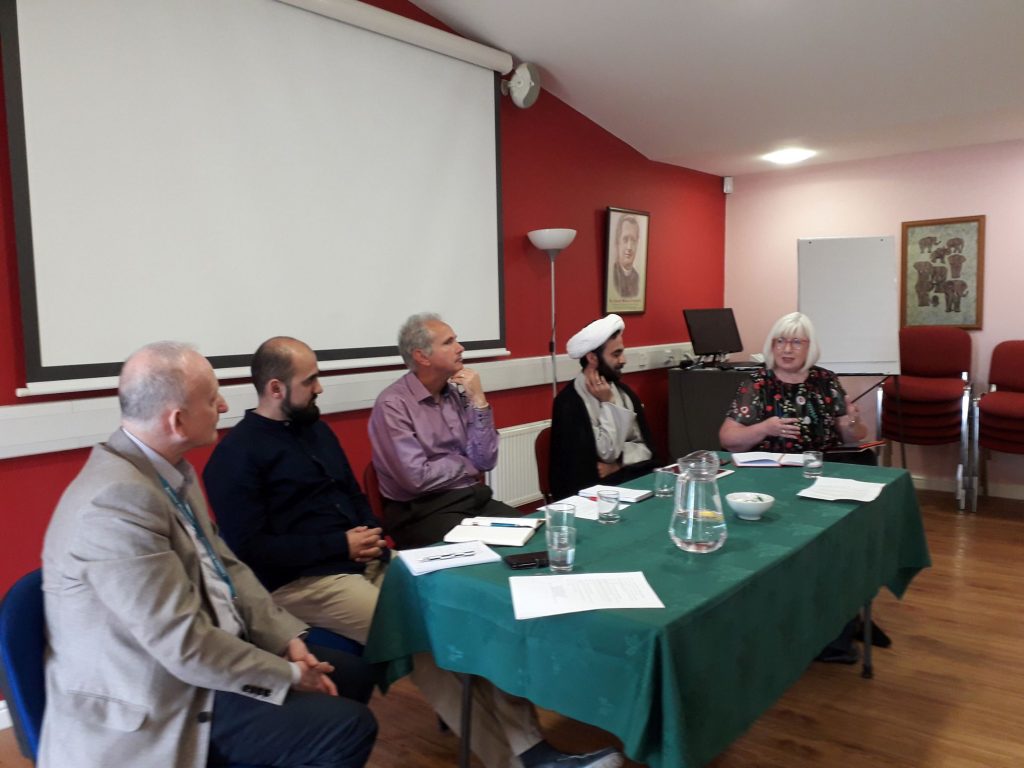