A reflection on engaging in online interreligious dialogue – by John Stoer, Member of the Bishops’ Committee For Interreligious Dialogue

As someone new to inter-religious dialogue, I am conscious of how important it is and how difficult it is.  I have spent most of my life in a Catholic world: I come from a Catholic family; went to a Catholic school; married a Catholic; and have worked in Catholic education all of my professional life. I do not regret any of this but like many Catholics my experience of people of other religions is limited. I have in recent years, however, become interested in how the Church understands other religions (the theology of religions) and, from a Catholic perspective, inter-religious dialogue.

Pope St John Paul II argued for the need for dialogue with others. Inviting leaders of different religions to come together to pray at Assisi in 1986 is a well-known example and throughout his papacy he exhorted all believers “individually and together, [to] show how religious belief inspires peace, encourages solidarity, promotes justice and upholds liberty” (Vatican City 28/10/1999). Pope Francis continues this work through his own witness and his writings from Evangelii gaudium (2013) to Fratelli tutti (2020).

Four inter-related forms of dialogue are identified in a Vatican document, Dialogue and Mission (1984). They are: dialogue of life, where people strive to live in an open and neighbourly spirit; of action, in which Christians and others collaborate for common good; of theological exchange; and of religious experience. Speaking only for myself, though I suspect for many others as well, through much of my life I have not engaged in any of these four forms of dialogue. I did not prioritise it and had limited opportunity to meet adherents of other religions, even as neighbours. At the same time, I have become increasingly aware of the need for dialogue to inspire peace, encourage solidarity, promote justice and uphold liberty, and I would add, to promote the importance of the religious dimension of life.

In recent years I have, however, had opportunities to engage in dialogue especially with the Shia community in Glasgow, the Ahl Al-Bait Scotland Society. I was a member of a small committee of three Catholics and three Muslims who together organised a Zoom conference on human fraternity. (A recording of the conference can be found on this website). Without question, I learnt from engaging with the three Muslim men on the committee. Their courtesy in both manner and forms of address, the strength of their faith and their participation in their community made me very aware of my need for ongoing conversion. 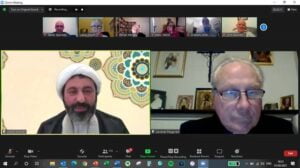 During the conference Cardinal Fitzgerald, who together with Dr Shomali was a keynote speaker, made reference to Dialogue and Mission and how through dialogue “Christians meet the followers of other religious traditions in order to walk together toward truth and to work together in projects of common concern” (DM 13). In my limited experience, working together is much easier than “walking together towards truth”. In the committee everyone was focused on one outcome, the best possible conference given the limits of lockdown, with everyone keen to ensure an appropriate balance between Christian and Muslim, and that the conference really was a joint effort. The two speakers shared this goal, and in their talks and dialogue it was evident that both Christians and Muslims have much in common in their desire to work for the good of all. At the same time, I am aware of barriers. Some are social, political and cultural – barriers which exist between Catholics as well -but every time I attempt to understand something religious or ‘doctrinal’ in another religion I am always conscious of difference: different starting points and taken-for-granted assumptions such as who Jesus is, the place of sacred texts, and how to arrive at a moral and ethical position. I suspect that in “walk[ing] together towards truth” I am only just beginning to crawl.

Guest blog – Cardinal Michael Czerny reflects on the significance of the first International Day of Human Fraternity marked on Thursday, in this reflection which is reposted from www.igNation.ca – the blog of the Canadian Jesuits.

4 February has entered the world’s calendar of significant commemorations.

On that day in 2019, during his apostolic journey to the United Arab Emirates, Pope Francis co-signed the Document on Human Fraternity for World Peace and Living Together along with the Grand Imam of Al-Azhar (Cairo), Ahmad Al-Tayyeb. This Document raises the great themes which, 20 months later, would be taken up and developed in the Encyclical Fratelli tutti.

The unprecedented encounter in Abu Dhabi soon inspired the creation of the Higher Committee of Human Fraternity. The members, an international group of religious and cultural leaders and scholars, are dedicated to sharing the Document’s message of mutual understanding leading to peace. The Committee plans to establish an Abrahamic Family House with a synagogue, a church and a mosque facing each other around a commons on Saadiyat Island in the capital of the United Arab Emirates.

On 21 December 2020, the United Nations General Assembly designated 4 February as the International Day of Human Fraternity. In the January 2021 edition of the Pope Video, titled “At the service of human fraternity,” the Holy Father highlights the importance of focusing on what is essential to the beliefs of all religions: worship of God and love of neighbour. “Fraternity leads us to open ourselves to the Father of all and to see in the other a brother, a sister, to share life, or to support one another, to love, to know.”

The Holy See’s planning for this inaugural International Day of Human Fraternity has taken place under the leadership of the Pontifical Council for Interreligious Dialogue. The Council was created in 1964 by Pope Paul VI to work on relations and dialogue between the Catholic Church and the faithful of other religions. It holds interreligious meetings, publishes a variety of materials, and collaborates with bishops and episcopal conferences on matters related to interreligious dialogue. Here is the first IDHF video in various languages.

Today, 4 February, Pope Francis and Grand Imam Ahmad Al-Tayyeb are participating virtually in an event hosted by Sheikh Mohammed bin Zayed, Crown Prince of the Emirate of Abu Dhabi, with the participation of United Nations Secretary-General António Guteres and other personalities. The event is being broadcast on Vatican News at 8:30 a.m. (EST).

Cardinal Miguel Ángel Ayuso Guixot, MCCJ, President of the Pontifical Council for Interreligious Dialogue, says the celebration “responds to a clear call that Pope Francis has been making to all humanity to build a present of peace in the encounter with the other.” He adds that “in October 2020, that invitation became even more vivid with the Encyclical Fratelli tutti” and comments that “these meetings are a way to achieve true social friendship, as the Holy Father asks of us.”

Judge Mohamed Mahmoud Abdel Salam, secretary general of the Higher Committee of Human Fraternity agrees with this perspective. In his presentation at the conference launching Fratelli tutti, he remarked that “In this decisive phase of human history, we are at a crossroads: on the one hand, universal fraternity in which humanity rejoices, and on the other, an acute misery that will increase the suffering and deprivation of people.”

In the future, starting in 2022, with the experience of this first celebration of the International Day of Human Fraternity and with more time to prepare, the local Churches will be encouraged and helped to participate actively with intercultural and interreligious events marking this date.

At yesterday’s weekly audience, Pope Francis said: “I am very pleased that the nations of the entire world are joining in this celebration, aimed at promoting interreligious and intercultural dialogue… The U.N. resolution recognizes ‘the contribution that dialogue among all religious groups can make towards an improved awareness and understanding of the common values shared by all humankind.’ May this be our prayer today and our commitment every day of the year.”